Haines Debates on Lutak Dock redevelopment, how to pay for it and the future of the economy | Radio KHNS

Haines debate how to renovate the Lutak Dock, how to finance it and how it will be used. As KHNS’s Corinne Smith reports from Lutak Dock Second Town Hall, the audience heard from potential economic development partners, funders and discussed the future of Haines’ economy.

Businesses and communities in Southeast Alaska and Canada are interested in renovating the Lutak Wharf in Haines. This is because it is a key disembarkation point for transporting goods from the Inside Passage to northwestern British Columbia and the Yukon.

At Lutak Dock’s Second Town Hall on Thursday evening, Harbor Master Shawn Bell said the first phase would fill about 1.5 hectares next to the existing ramp.

“We need space,” Bell said. “And we need stable altitude space for cargo and fuel operations.”

The borough estimates it would cost up to $ 3 million, including permits and design. The second phase would consist of demolishing the existing wharf. In its place, there would be a $ 22 million partition. Bell says the two projects would be expensive – and interconnected.

Of course, who would pay for the work and how was an intense conversation.

“At the end of the day, anything we invest in has to meet two important criteria,” Weitner said as mayor. “It’s a good financial investment, there is a return on capital, so we can continue to reinvest in the state, and have the support of the community.

With financial support from AIDEA, Haines is expected to stimulate economic activity and dockside income to repay millions of loans with interest. 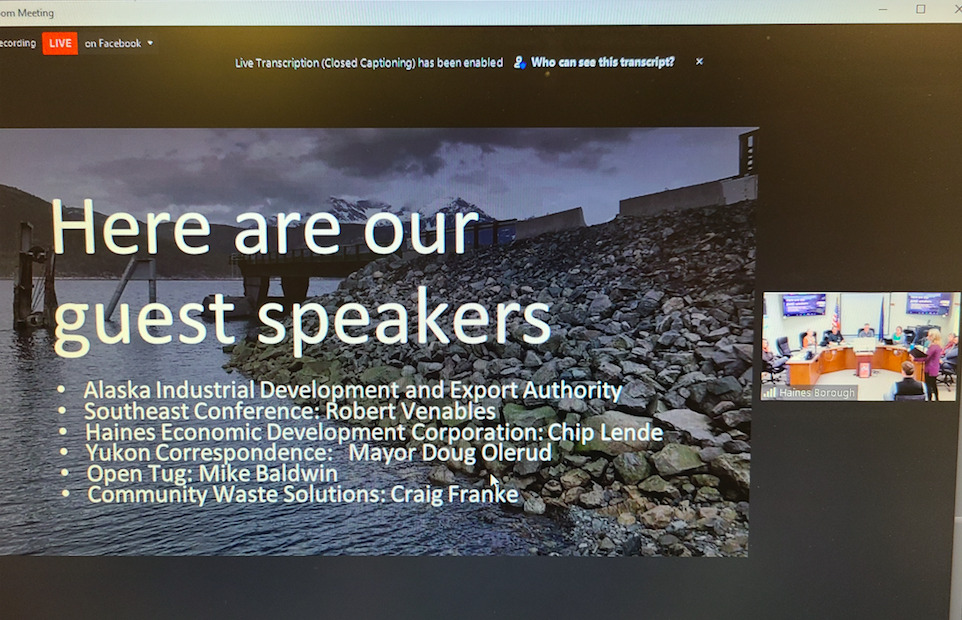 Other options discussed were financial support from Canada’s Yukon Territory interested in cheaper transportation costs than shipping to Skagway, or funding US federal infrastructure grants.

But so far, this is all speculation. And relevant members of the public like Haines resident Sue Levinson has asked the community to exercise caution.

“We took on the school’s debt, believing the state was going to pay most of it,” Levinson said during the public comment period. “And wow, guess what?” The current administration has just snatched it away. So you have to be very careful when you incur this type of debt, can you really handle it on your own? “

Others, like Sue Bell, say the infrastructure investment has to happen. Then, she said, Haines can invite industries to use the wharf.

“You don’t want your kids to be like mine, where they grew up and left because there was no opportunity for them. You want them to stay here, ”Bell said. “So you have to provide the infrastructure to make the business profitable, whether it’s something they bring in and build, or something they build here and ship. “

Thom Eely cautioned against renovating the wharf for private industry without making sure it pays its share of the taxes and fees.

“We don’t need to be a corporate social administration and a community, where we give millions of dollars to private industry so that they can earn millions of dollars and we get very little back,” Eely said. “Without any sort of resource export tax, we won’t get anything at Lutak Dock, and if AIDEA builds a facility there, the money will go into their coffers.”

Many were particularly concerned about the impacts of the development of the wharf to accommodate an ore terminal. Don Polling warned about Skagway now working to clean up contamination from its ore terminal, and toxic inheritance.

“Now, if Skagway doesn’t want to operate his ore terminal anymore because he poisoned his port, does that mean Haines can borrow money so that we can poison our port as well?” Says the poll. “We have some concerns here with this stuff.”

The Borough of Haines is now applying for federal grants from the Department of Transportation. There will be other town halls on the Lutak Dock but they have not yet been scheduled.

Brewers and Rockies ready to go after ...